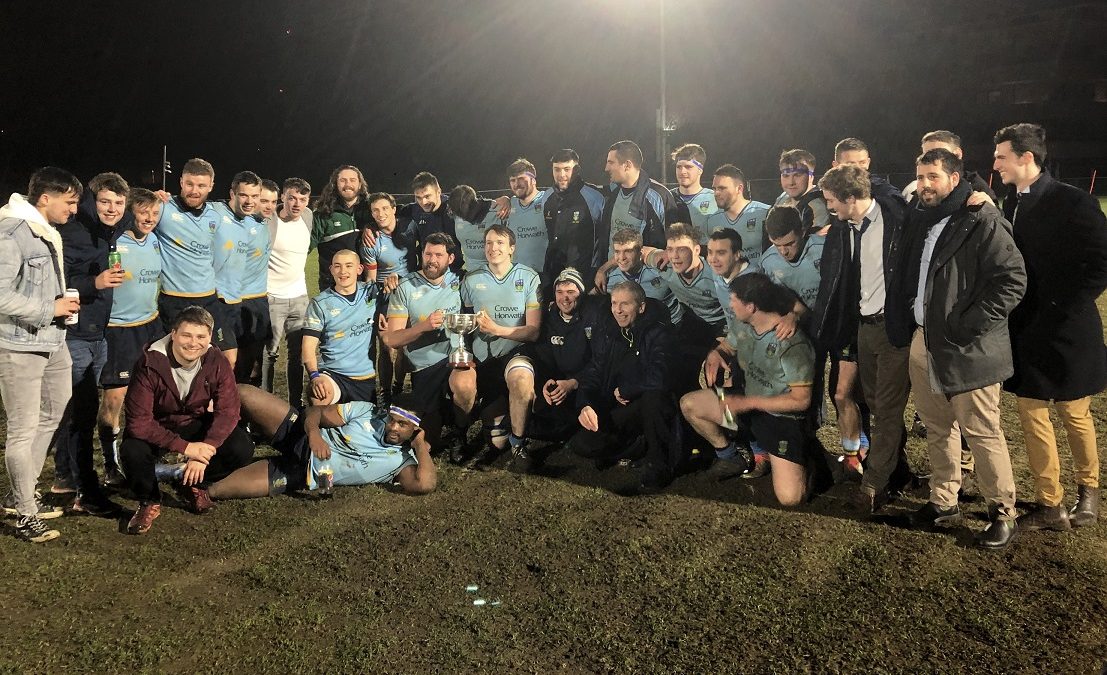 They say you have to ‘sow before you reap’. In Junior Rugby it is mostly about the former – putting in place the structures – cajoling and encouraging enough young players to give it a try – then saying your prayers at night and hoping for the best.  For this current crop of UCD J2 and J4s – the structures have been put in place by Bobby Byrne, Kevin Croke and John Hammond – supported by UCD Rugby Presidents (and their rugby committees) and none more so that the current incumbent David Carrigy. The sowing is done by many people – but in particular Eoin ‘Dales’ Daly – with assistance from Dara Coyle (‘Coyler’), Paddy Barrett and some chap called Kevin.

On Friday night last all that work finally paid dividends – but to be honest – there are so many people who have helped along the way in the distant and recent past – that without their resilience and honest endeavour this current crop of players may have given up hope or worse still given up rugby. I will attempt to name a few of them here with apologies to anyone who remains unmentioned. Let me start with World Rugby’s longest serving Manager (still serving) – that would be the great but modest David Jones. Jonesy has been sprinkling gold-dust around the environs of Belfield for over 25 years now – a mixture of wisdom, pragmatism, eternal optimism and no small amount of rugby knowledge. Previous coaches have all left their marks – the great Paul Taaffe ably assisted by Justin Howlett (JH) and then later on by Geoff Sheehan. Johnno O’Donnell (who hailed form Kerry) was a player and captain – but such was his leadership quality, matched with complete dedication and enthusiasm, that his legacy goes way beyond what a player can achieve (we wish Johnno well as he plies his trade and rugby brain in Germany). Taaffe, JH and Johno took an earlier iteration of this squad out of Metro Division 5. Taaffe and Geoff then took them to a Division 4 playoff 3 years ago – only to be nipped on the line by ‘Rock.

The win on Friday night is for you guys and it was great to see some of you there in the flesh to tell you personally. To the current squad, coaches and backroom team – one can only say a hearty congratulations on your great achievement. Declan Kidney (for younger players ‘Deccie’ brought Ireland their first Grand Slam in 61 years back in 2009!!) used to always say we should celebrate our achievements before we move on to the next challenge – well you take it from the victors on this occasion give it their best shot at celebrating (including VIP treatment on Friday night at which Naas also attended – followed by being guests of honour at the pre-match lunch for the Seniors Vs. Clontarf). The J2s and J4s in UCD are joined at the hip – One Group – Two Teams. One cannot survive without the other – so chaps – all of you – take a collective bow.

Before we get to the actual match report (you may at this stage be wondering will it ever start!!) – may we also mention our walking wounded – Tim Stafford, Locky (Lochliann McDonnell), Dave O’Brien (who temporarily became a member of the ‘brains trust’ while recuperating!), Dan O’Sullivan, Johnny Hill, James Shanahan (Shanners) – guys you know this already – leagues are not just won in Spring – the battles happen down in a wet and windy Rathdrum in early December where you might get the ears boxed off you – but you get a fine lamb stew afterwards!! This win is yours too – get well as we need you all for our Division 3 campaign in 2020-21. (Reporter’s note – we had many other players who helped through the campaign – so a big collective thank you to you all).

Due to the extended Prologue above – you will be glad to hear that the match report will be short and succinct! With a large crowd in attendance (including Paddy Meenan’s Dad James and brother David – both hoping to see a repeat of the winger’s two tries the previous week!! – also Faolan Crowe’s Mum (Brid who hails from Urlingford) and Dad Morgan (a Mary’s man like his son!) – also Tim Wu Murphy’s girlfriend (in line for supporter of the year! – also present were Sam’s parents, Lee and Mark, a proud night for them – plus many other parents and friends) – suffice to say the crowd from both UCD and Naas were fully involved but also were presented with a full on no holes barred 80 minutes of classic cup rugby.

For 10 minutes both teams went hard at it – the tacking and battle for possession was ferocious – the difference in the end during a very even first half was the No. 9 for UCD – the great Scott (Scotty) Smith  – for our regular supporters (both of them!) they would know what Scotty – and indeed our other No. 9 Will O’Sullivan – can do – both have scored hat-ricks for us this season (not in the same match it has to be said) – both are known for that incisive snipping breaks. On Friday Scotty pulled out all the stops and dotted down twice. A bit like John Eales for Australia in the Rugby World Cup final of ’91 – it is our No. 8 who takes the kicks – Conor Scully (known to us as just Scully!) quietly goes about his business after training  where his kicking coach (one of the other lads!) retrieve the balls for him – Conor we appreciate that you put in this extra dedicated time and on Friday the rest of UCD found out about you – Scully knocked over 2 conversions and 3 penalties to keep the scoreboard ticking over.

Naas turned the 2nd half into a full on assault of the UCD J2 line – the crowd were privy to one of the great defensive displays as wave after wave of marauding Naas forwards were repelled – in the end Naas did score – but at that stage the clock was showing 75 minutes – the rest as they is now history. Cue elation – euphoria – exhaustion masked by the adrenalin rush and knowledge that this band of brothers had finally delivered on the big day – cue the celebrations as the Yerr-a-Waddie got the full treatment (with apologies to Trinity who weren’t even playing!). The cup was presented to our great leader Sam Doggett  who gave a fine speech and hit the right tone – he even remembered all the guys names as he called them up to take their bow and receive their coveted and well deserved medals.

Remember the date – this squad came of age – Division 3 awaits – given Div 3 includes Enniscorthy, Navan, Tullamore, Skerries as well as nearer neighbours I think we are gonna need a bus!! The UCD Junior Rugby Movement is underway – get on board – see you for our cup match(s) and definitely see you next season as Division 3 won’t know what hit it!! Take care and thanks again – Kevin McD

For the Record – The Team

Brendan O’Donnell (who has played all 1,000 minutes of the J2 League campaign)

Dave O’Brien (Coach on the night)

Kevin Mc Donough (Manager who really wants to be a player!)