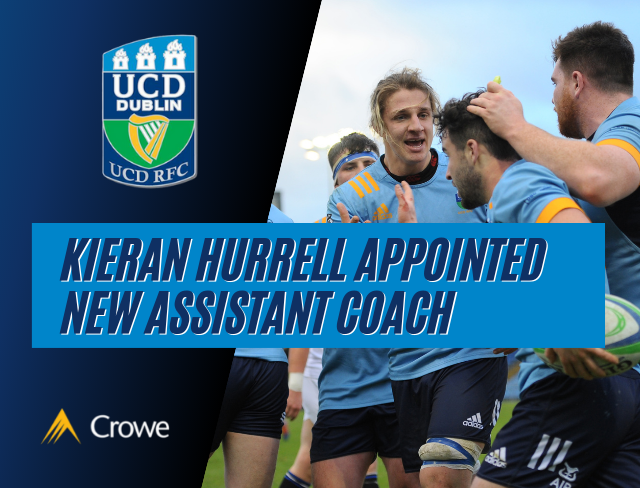 UCD RFC are pleased to announce the appointment of Kieran Hurrell as an assistant coach to our Senior 1st XV for the 2021-22 season.

Originally from the Waikato province in New Zealand, Kieran moved to Ireland in 2008 where he has enjoyed significant success as a player and coach.

Following 4 seasons playing with Old Belvedere, winning AIL Divisions 1B & 1A in 2010 and 2011 respectively and the Leinster Senior Cup in 2012, Kieran then played 3 seasons with Old Wesley, winning AIL Division 2A in 2015.
Kieran was then appointed as player coach to Wicklow RFC. In his 2 seasons with Wicklow RFC, the club won their first Provincial Towns Cup and gained promotion to Leinster Division 1A.
In 2017 Kieran took up the head coach role with Enniscorthy RFC and won back-to-back Provincial Towns Cups, the 2018 Leinster Division 1A league, and the IRFU round robin playoff to gain promotion to the AIL.
Kieran is currently in his second season coaching the Leinster U19s as well as overseeing the player development programmes across the Metro area of Leinster Rugby.

He is a most welcome addition to the UCD RFC coaching staff and we wish him every success for the coming season.