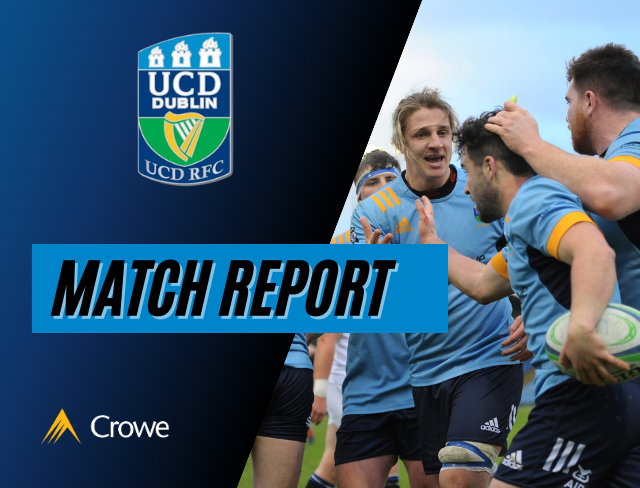 Deep into injury time, (in a sunny and empty Donnybrook) Bobby Sheehan salvaged a losing bonus point for Collidge at the end of a match that only came to life 3 minutes into the second period when Old Wesley scored twice in the opening 5 minutes, firstly from a penalty (for off-side) and then a penalty try given after a series of penalties for scrum and maul infringements by Collidge.

The first half was featureless with neither side really threatening to go beyond the opposition 22. A succession of penalties which neither side could take advantage of were wasted and the stop-start nature of the game wasn’t helped by some poor handling and passes going astray or going forward. Wesley’s scrum dominance went unrewarded as two kickable penalties sailed wide.

For the second period, the home team had the strengthening breeze from the Bective end at their backs and were 10-0 ahead after 5 minutes. This seemed to spur Collidge into a response and Andy Marks was rewarded for his continued probing of the home defence with a well-taken converted try after 58 minutes (10-7). However, 2 minutes later Collidge again infringed the offside line and Old Wesley added the three-pointer and the went further ahead (18-7) on 67 minutes with a well-worked (unconverted) team try in the corner.

As Collidge pounded the Wesley line with time running out, a yellow card for a deliberate knock-on reduced the Wesley numbers and from the resultant penalty and subsequent mauls, Sheehan crashed over to rescue the losing bonus point.

We use cookies on our website to give you the most relevant experience by remembering your preferences and repeat visits. By clicking “Accept”, you consent to the use of ALL the cookies.
Cookie settingsACCEPT
Manage consent

This website uses cookies to improve your experience while you navigate through the website. Out of these, the cookies that are categorized as necessary are stored on your browser as they are essential for the working of basic functionalities of the website. We also use third-party cookies that help us analyze and understand how you use this website. These cookies will be stored in your browser only with your consent. You also have the option to opt-out of these cookies. But opting out of some of these cookies may affect your browsing experience.
Necessary Always Enabled

Any cookies that may not be particularly necessary for the website to function and is used specifically to collect user personal data via analytics, ads, other embedded contents are termed as non-necessary cookies. It is mandatory to procure user consent prior to running these cookies on your website.