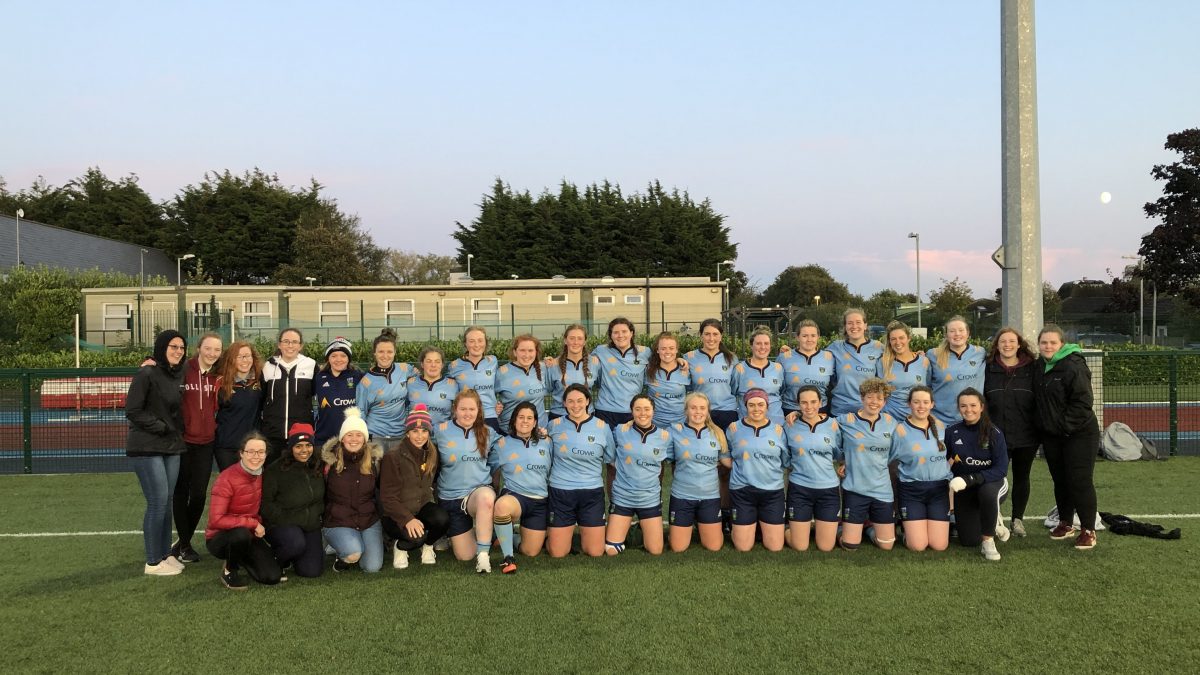 It was the one result that always seemed to elude them, but on Wednesday UCD Women’s Rugby team finally managed to put their losing streak against DCU to an end with a convincing 5-24 win over the hosts in their first league outing of the season. Tries in the first half from Roisin Crowe and Ray Lawless put the Collidge girls on the front foot early on, an advantage they fought hard to maintain throughout the match.

Leading from the front was captain Christine Coffey, fresh from her second season of inter-pro duty with Munster. Playing in the unfamiliar position of out half, Coffey’s level head and calming presence was the backbone of the UCD defence. Her razor-sharp reactions brought the Collidge attack to life, and the captain was instrumental in second half tries from Aoife O’Shaughnessy and Crowe.

The Collidge squad was a great mix of youth and experience, with 8 girls earning their first senior cap for UCD. Their eagerness was particularly evident in Collidge’s defensive line speed, which gave the hosts precious little time in our 22 and forced a multitude of knock-ons. That being said, UCD veterans Jessie Bauer and Siobhan Tangney were on hand to show the new girls how it’s done, with both putting in massive shifts in the pack.

Any pre-season rust was shaken off in the 9th minute when outside centre Crowe dotted down for the visitor’s opening try. Quick hands from Coffey and debutant Jenny Dunn allowed Crowe to set winger Ali Norman free on the right wing. Crowe looped around and was back on the outside to collect the slick offload from Norman and sprint away to score under the posts, the extras added by Coffey.

One of the main features of Collidge’s game was their width in attack and their ability to keep the DCU defence stretched. This led to their second try when left winger Lawless crossed the whitewash minutes later. Carries from forwards Geena Behan, Cara Donovan and Martar Ta battered the DCU line and sucked in defenders, and an opportunistic break from scrum half Aoife Byrne ultimately left Collidge with an overlap out wide. From there, Coffey drew the defender before releasing the final pass to Lawless, extending UCD’s lead to 12 points.

This lead would be cut to 5-12 at half time, a rare visit to the UCD 22 resulting in a well worked try for the home side. Any line-breaks made by DCU were otherwise dealt with by the Collidge players-Emma Costello, Byrne and O’Shaughnessy all making try saving tackles during the 80 minutes. UCD once more demonstrated their clinical nature inside the opposition 22 when fullback O’Shaughnessy scored midway through the second half. A solid scrum provided the perfect platform for the backs to spread the ball wide to O’Shaughnessy, who brushed off tacklers to bag another 5 points for UCD.

Much like the first half, Collidge soaked up attacking pressure from the home side with ease thanks to second row Hannah Woods and substitute Orla Hanlon shutting down any potential threats. Anna Kavanagh, Sadhbh McDonnell and Clare Coombes also made their presence felt off the bench- one notable hit from Coombes driving the DCU attack back nearly ten metres! Laura McDonald and Aine Keogh were also introduced to guard the wings and keep the hosts to one score.

A lineout on the DCU 10 was the origin of UCD’s final try of the match, which was described quite accurately by squad member Rachel Whitten as ‘the sexiest try you’ll ever see.’ Scrum half Byrne whizzed the ball out to Coffey, who danced her way through the heart of the DCU defence and brought play up to halfway, where a series of Fijian style offloads between Coffey, Rachel Winters and Ciara Byers kept play going until the ball found its way to Crowe who once again turned on the after burners to scorch her way past defenders and over the try line for her second. Coffey nailed the conversion, extending UCD’s lead 5-24.

The full-time whistle came soon after, confirming UCD’s bonus point win. A perfect start to the season with plenty of positives and also plenty of areas to improve on, UCD now hope to carry the momentum to the next round when they take on NUIG in Galway next week. A big congratulations to all the girls who enjoyed their first outing in Collidge blue- Geena Behan, Martar Ta, Rachel Winters, Jenny Dunn, Ciara Byers, Anna Kavanagh and Laura McDonald, and also to Aine Keogh who won her first senior cap.